The Benefits of Wine Consumption 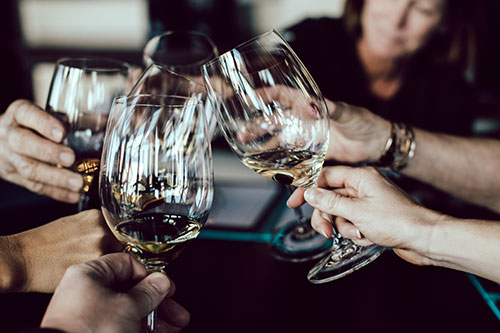 Over the past 30 years, hundreds of scientific studies throughout the world, involving more than 1 million people, have suggested that moderate wine consumption can extend life expectancy by several years beyond that of non-drinkers, assist in protecting against various types of heart disease and cancers, and delay or reduce the risk of developing a range of other diseases.

In particular, research over the last century has demonstrated how key organic components found in wine, namely flavonoid and non-flavonoid polyphenols, provide additional healthful benefits not attributed to other alcoholic beverages.

In addition to the positive aspects associated with the alcohol in wine, the polyphenols found in no other alcoholic beverages but wine, are responsible for the healthful and protective properties of wine. Polyphenols such as quercetin and catechin, are known for their antimicrobial, antiviral and anticarcinogenic properties.

Resveratol, the compound found primarily in the skins of grapes used in red wine production, is responsible for some of the health-giving attributes of red wine, such as the maintenance of a healthy heart and circulatory system and the potential contribution to minimizing the prevalence of certain types of cancers.

Moreover, according to studies published in the AMERICAN JOURNAL OF ENOLOGY AND VITICULTURE on levels of resveratol in over 1000 wines, Canadian wines had 2 to 3 times the concentration of resveratol than wine from most other prominent wine-producing countries and regions.

Tartrate crystals, sometimes referred to in Europe by the romantic name of “wine diamonds”, occur naturally in wines. They may be found as tiny crystals on the cork or at the bottom of the bottle in a fine wine. Although their scientific name is potassium bitartrate crystals, you may recognize them by their culinary name, cream of tartar.

How are tartrate crystals formed?

Tartaric acid is the primary acid found in grapes, just as citric acid is found in oranges, lemons and other citrus. In wine, the tartaric acid binds with potassium, also occurring naturally in grapes and forms potassium bitartrate crystals. These crystals precipitate either to the bottom of the fermentation vat, adhere to the inside staves of the oak barrel, or form in the bottle; especially if the wine is chilled.

It is a good sign showing that the wine has not been over processed. 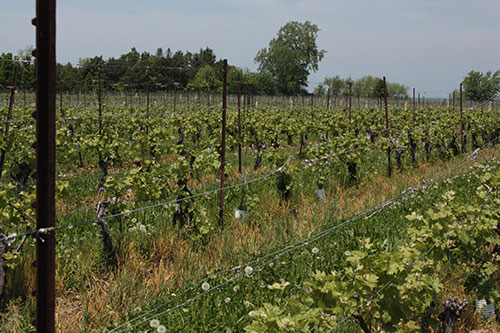 If tasted, they are slightly tart but not unpleasant; just like the cream of tartar you might add to beaten egg whites to form a meringue. These tiny crystals are often found in fine unfiltered or old wines amid the natural sediment at the bottom of the bottle.
Why are tartrate crystals in some wines and not in others?

Many wines are “cold stabilized” at the winery to remove crystals before bottling. This can be done by chilling the wine to near freezing for a period of days to accelerate the formation of the crystals, followed by filtration. This is done purely for aesthetic reasons since it is difficult for the wine industry to inform all consumers about the natural occurrence of tartrate crystals. The drawback to this technique is that there is the potential for oxidation of the wine since chilling makes oxygen more soluble.

Our emphasis with all of our wines is to use the most gentle winemaking techniques possible, with minimal processing, to fully retain the wine’s depth of flavour and complex character. Because these wines remain very natural, you may find a small amount of tartrate crystals occurring in the bottle after extended storage at cold temperatures.
How to serve a wine that may have tartrate crystals:

The proper way to serve a wine that has tartrate crystals, or other natural sediment, is to first allow the wine to sit upright, undisturbed, until the particles settle to the bottom of the bottle. Then gently decant the wine into a decanter, or into a wine glass, leaving behind the small amount of sediment. In Europe, this is often done ceremoniously over a candle to observe when the sediment reaches the neck of the bottle.

Use code “Freeshipping”on orders of $120.00, available in Ontario ONLY has been extended to the end of April 2023!

Use code "Freeshipping"on orders of $120.00 or more, available in Ontario ONLY has been extended to the end of April 2023! DISCLAIMER: FREESHIPPING code must be used on orders prior to completion of the order. We can not refund your shipping after the order has been placed. Dismiss